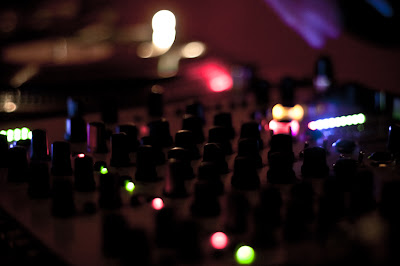 Six months down and it was a pleasure to welcome the incognito SVN to TEA’s podcast bunker with an hour’s worth of veiled and flirtatious house music.

In 2011 "Track 2" from SUE001 nestled in neatly at number 10 on TEA’s Top 100 Tracks for 2011 - pigeonholed by us as “acoustic house” (one for the Hardwax wordsmith). In 2012 the tenebrous German, under his SVN handle, released the one production, "Track 1", a collaboration with the sub rosa Paleo Logos.


Mike Dehnert loaded up record number 25 into the Fachwerk canon, which according to Discogs is his ninth long player. Sascha Rydell and Roman Lindau submitted their own solo EPs for the label with their Propose and Source D'Inspiration missives as well as contributing (along with MD) to three Fachwerk various artist EPs.

Having already spoken with Sacha Rydell in 2011, TEA snaffled part two of the Fachwerk throng in Roman Lindau for a mix and interview. It was the first time a writer other than myself contributed to the blog and it was TEA resident DJ (when he is in Australia) Nic Tuohey and he met up with Lindau while spending six hedonistic months in Berlin.

A Fresh TEA interview and podcast with Reno Wurzbacher soon followed with the Berliner opening the doors to “the huge Fachwerk-apartment” to let us in on Sachas Rydell’s record collection, his relationship with Roman Lindau, hip hop and his attuned taste for turkish tea.


Dario Tronchin aka Chevel burst out of abyss in 2012 with six releases - a watershed year for the young Italian. He coincided his sonic rebirth with a special Chevel-only mix for TEA in the lead up to the launch of his DIY imprint Enklav. Prior to unravelling his self-released Apply Within LP, RA’s Andrew Ryce jotted:

"Dario Tronchin is a young Italian producer whose detail-oriented techno shares a lot in common with experimentally-inclined producers such as Lucy and Kangding Ray. The majority of his early work came through adventurous Italian label Stroboscopic Artefacts and German imprint Meerestief, but most recently he set up the Enklav digital-only platform as an outlet primarily for his own material.

That imprint released his first full-length late last month, following a series of four EPs in September. Apply Within features 12 new tracks from Tronchin, with a slightly stronger emphasis on melody and pad work than his previous releases."

The first TEA selections of 2012 came via Patrick Walker and Al Mathews (aka Smear) aka Forward Strategy Group. Since 2009 the duo have steadily released a controlled stream of EPs - largely on Perc Trax - which ultimately led to their saluted and debut album Labour Division, unshackled in May of this year. FSG’s Labour Division came one year after Perc’s heralded Wicker and Steel LP -  described by The Guardian in the wake of last years London riots as “an angry snapshot of modern Britain”.

Come August 17, we broke a five month TEA party drought at our housey homeland Loop with Cosy Sounds Part II. Cemented to the bill as always was Daniel “Swayze” Filipovic and myself, James Manning.

TEA excitedly ushered in Phaon Phipat - a diamond DJ in the sometimes rough of Melbourne. I was fortunate enough to meet Phipat at a Levon Vincent show and the days following, via a few friendly email exchanges, I was led to his superb Space Odyssey 900 and 001 mixes. The young Melbournian’s taste in deep house rivals that of the lab coated Germans making it. 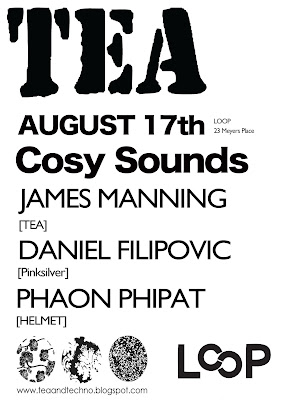 On the night of Phipat's TEA debut, I remember having a conversation with a friend of his, Alex Gibb, an instrumental cog (along with Phipat) in the well curated Melbourne throw down HELMET. Our chortle lampooned worn out EQ knobs - particularly the bass and effects knobs on Pioneer mixers.

The next night I serendipitously came across a worn out bass knob of my own and this humorous turn of events resulted in my “Diary Of A Lonely DJ” post, which highlighted the many shortcomings local DJs have to put up with, including: awkwardly repositioning turntables back from "battle mode", finding out which RCA cable leads where, to then shining the back of a mixer with a phone to figure out what goes where - all of which eats into your already brief one hour opening slot.

Nic Tuohey’s second written entry began as an private email he sent to me after a night with Marcel Dettmann at Berghain. It read:

“Yesterday I woke up with a killer hangover at midday and got coerced into going to Berghain. No regrets really. Dettmann played the best set I've ever seen by him. I would go as far as saying I have not heard a techno set like that in about 12 years. Sounded like a set by Mills or Hawtin back in the day (not to detract from his ability because he clearly is a legend in his own right).

It was immaculately programmed, real sense of storytelling and every track was just like ‘where the fuck did he find this record???’ It would be fair to say that most of the records he played were old ones anyway, so I might actually be telling the truth rather than hypothesising.

Ben Klock was great as well but didnt have the intellectualism, futurism and obscurity that Herr Dettmann did. He did what he did best though and absolutely smashed it with his industrial strength minimalism.”

My attention then turned east. No longer is the Eastern Bloc of Europe the butt of YouTube videos showing grubby daylight forest raves, with shirtless skinheads trying to insert their blocky craniums into throbbing speaker cones.

Eastern European techno is amidst a revolution with artists like Stanislav Tolkachev, Unbalance and Unbroken Dub worth keeping an eye on in 2013.

TEA’s 28th podcastee Woo York joins Tolkachev as an up and coming Ukrainian act and in 2012 the duo released their third EP Igla for Mutex Recordings (neatly packaged with remixes from Truncate and MRSK).

Woo York's TEA podcast was live P.A. made up of exclusively their own and improvised material.

It's now September and time for some retrospect. Collecting techno for me at the begininning, was originally fuelled by the bigger-the-better kick drum, clashing hi-hats and ear jarring percussion. However, I've never really been a fan of snares in techno, even rim shots for that matter...

Trends come and go and tastes change, but an intrigue in simplicity and repetition, as well as a fascination for the overly complex, for me at least, will always remain.

Why Don't you Change was a mix of ambient records and techno B-sides that I have collected since starting TEA. It's 100 per cent vinyl sounds (which you will notice thanks to the intermittent mono-to-stereo signal from my worn needles during the first couple of minutes) and was mixed using two Technics 1200s and a basic Numark DMX06 mixer.

The inspiration behind the mix was the cold and grey skies of a Melbourne afternoon coupled with moving house, which ultimately ended up as an mini-ode to those who have influenced my music, DJing, writing and of course TEA.