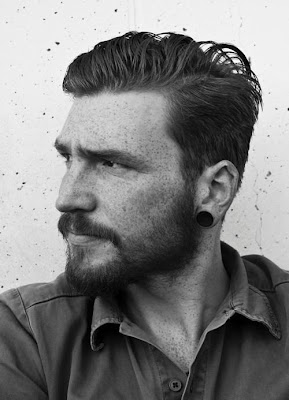 To help celebrate TEA's 200th post we are delighted to have resident DJ and founder of Berlin's Dystopian party Rødhåd compile an all-embracing mix of techno armed with austerity and laced with groove.

Over a cup of Bengal Spice, TEA caught up with Rødhåd over email for a brief discussion on his podcast, growing up east-side and how he was hoodwinked into playing an eight hour closing set at Berghain. 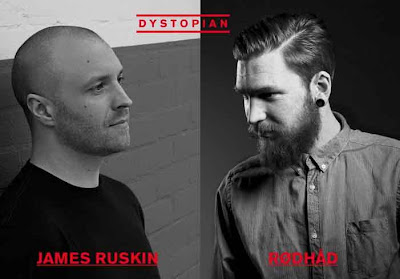 Where and how was your podcast recorded?

I recorded the set in my flat in Friedrichshain, Berlin. I used two technic's turntables, my old pioneer 600 mixer and a redsound loop sampler. Unlike my my older mixes which are a bit more chilled and dubby, I tried to create something faster. I used a nice balance between older and newer records as well as some experimental stuff. I like my mixes to have an arc of suspense and dramaturgy approach, it's all about catching the listeners attention.

How did you first get into electronic music and what has lead you to what you are playing today?

I was born and grew up in the east of Berlin and towards the end of the 90's was when I first got in contact with electronic music. I was 15 when I first started going to parties and I liked what the DJs were playing as well as their style. Some months later I bought my very first turntables and some records, some old loopy techno stuff like Drumcode, CLR, Stigamata and Zenith etc. Over the years I've really opened up to a "deeper" sound and moved away from the loopy stuff. I now try to find a balance between dance orientated music and interesting landscapes of sound.

Tell us about your Dystopian party.
Two friends and myself run the Dystopian parties and the concept was an idea that the three of us came up with together, we want to express all things 'Dystopian'. We have been doing parties for 3 years now and want our music, artwork and everything we do to have a melancholic and dystopian feel whilst creating a similar atmosphere for each event. I play every Dystopian party and am very happy to be doing so. We try express our work by doing it the same as back in the day, it's all about the music and vibe. It's also good to have no pressure for putting on a party, it's not a monthly thing but our perfect line up, idea or reasoning for when we want to host it. The next step will be releasing music, the name Dystopian is perfect for a label. Hopefully my release will be Dystopian 001.

You once played an 8 hour closing set at Berghain, how was that?

The booker of the Berghain called me two days before. I'd only played Berghain once so I was a little bit surprised because they asked me to close. Berghain has really crazy times at the moment, resident DJs like Ben Klock, Marcel Fengler and the rest are playing like 10 hour closing sets. The booker said something like: "maybe you can play for 2 or 3 hours, but please take some more records with you". So I arrived late Sunday afternoon and started after an amazing Ben Klock set. So yes, what can I say, it was a journey into sound. It was one of my best sets I've done in the last year and the 8 hours I played flew by. After my set the booker said to me with a smile "ok, I lied to you, I knew that you would be playing for at least 6 hours or more, but I didn't want to make you nervous." It was a great evening and I enjoyed every minute.

Where else can we see you play?

At the moment things are going well. Beside the Dystopian parties I am playing some bigger events in Berlin. I am playing some festivals like Gottwood in the UK and Nation of Godwana in Germany, as well as some other gigs in Europe like Helsinki. I'm also playing a second time with James Ruskin at the end of April in Milan at club Codice a Barre.

James Ruskin and Lucy are next at Dystopian on April 21st, how are things going?

We are really happy to have James Ruskin one of the best producers and DJs past and present playing. His label Blueprint is like a bible of techno and it's a pleasure to have him at Dystopian as well as Lucy from Stroboscopic Artefacts, who at the moment is leading the way. His music is amazing and his skills behind a laptop leave me speechless. We will be holding the party at Club HORST KRZBRG, Tempelhofer Ufer 1, 10961.

And of course, what is your favourite tea?

Bengal Spice for sure!

Join Dystopian's roll call of 120 plus to James Ruskin and Lucy on April 21st here and learn more about the night here.