At the moment in London, booking a big name act, securing a reputable venue and slapping together an aesthetically pleasing flyer just won't cut it for the average London reveller. House is a feeling and so should to the party it's being played in.


Avoiding the cliche of the bigger the better, Dolan Bergin's Electric Minds loft parties offer a smaller crowd the chance to carouse amid a cosy party atmosphere. Loft warmers so far included Session Victim, Move D, Jay Shepheard, Kassem Mosse and San Soda & Red D. On the record label side of things Electric Minds disco tip has seen releases from Yam Who?, Gatto Fritto, Max Essa and Ilija Rudman. More recently the label has shifted to a deeper sound with 4 lovely cuts from the mysterious GHL/Endian.

If Dolan Bergin was to come across as a shady east end promoter chances are he'd be driving around with a number plate reading "FINGERZPIEZ", but he is far to modest for that. From his inner north-east London warehouse beginnings in 2005, to his revered Electric Minds loft parties of today, Bergin's roving club night/record label has promoted itself through the cities divisions as would a sleep deprived Championship Manager gamer.

In a rare chance for Dolan Bergin to get a little heavier in the mix, TEA caught up with Mr Busy talk Arthur Russell, Halloween and his bedtime favourite.


So where and how was the mix recorded?The mix was recorded in one sitting at home using records and cds. It was recorded in August and I wanted to use some tracks that I’d been sent recently. Two U.K. Artists in the form of Shifted and Furesshu feature quite heavily, I really like their tracks and while its not every day I get to play techno out it made for a nice change to do that with this

Tell us about the story behind Electric Minds. It started as party in 2005 and became a label with its first release in 2009. What spawned the first Electric Minds party’s and who where they with?

The party came to life from living in a warehouse in Dalston during 2005 with 10 others. It was a really unique place to be in that there were a lot of creative’s from the world of art, music and fashion so I was exposed to a lot of different tastes. We all liked to party so when a birthday came up we used to strip the warehouse of our belongings and set up a sound system downstairs and on the 1st floor we’d put in a bar and the guys who lived up there would organise live music. We’d cover the cost from the bar so with free entrance we’d simply send out an email to friends with the date of the party and they’d run until the last man standing. We also had a roof that ran the length of the building so the nights would quite often finish off there trying not to think about the mess that waited for us downstairs. There were only so many of these parties you could throw in your home though so towards the end of 2005 we moved the party to a Russian snooker club a couple of doors down the road. I had been putting on parties before 2005 but mostly in traditional clubs so producing them from scratch was new to me then.

Tell us about running a night in London and working alongside so many of the other party's, clubs and events the city has. How has Electric Minds made it to where it is today?

There is a lot of competition in London, but whether its running a party or any other type of business, competition keeps things healthy. It provides choice for those wanting to find a party and also helps keep the standards high. Of course you want to be ahead of the competition and I think to do that you need to have a bit of imagination when it comes to seeing how spaces can work and then plenty of work to bring it all together. The competition is also made up of friends and working with the people behind secretsundaze, mulletover, Warm etc they’ve provided help and support in the past which is invaluable. 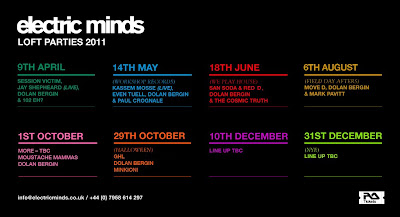 What then lead to the idea of starting a label and how long did it take to establish it once the idea was conceived?

I think the main reason the label was started is that the DJs playing at the parties had music to release so it seemed to make sense to try and combine the two. Id worked for record labels since I was 21 but they were mostly the major corporations so I wasn’t particularly passionate about the output. As a result I wanted to try my hand at helping to put out tracks that I was into.

Do you consider Electric Minds to be more of a platform as opposed to a label?

The label is really just a small operation; I put out a release here and there when I discover tracks that I like. So I think mostly events is what we do as its hard to find the time to concentrate on both things properly.

Have either the parties or label suffered or gained as a result of running both?

Id really like to spend more time discovering new music to release and have a consistent output but it’s just not realistic to do that and run events at the rate they have been happening this year. Releasing music for most people is a labour of love and unfortunately it’s very difficult to support yourself financially from that. Luckily I’m able to do both by throwing the parties, which is something I equally enjoy doing.

When the label first started its first few releases were very disco orientated and were somewhat capped off by your tribute to Arthur Russell. Tell us about that?

The parties have always been quite eclectic in terms of what we play, well eclectic in terms of the dance world in that it moves between disco, house, techno and perhaps a few other bits thrown in. So I think the label reflected that at a time when I was working with producers who moved between those genres. Listening back I think there is some inspiration from disco but they are all modern productions and certainly the first Arthur Russell covers from Lil Tony and Yam Who were very much house based tracks. The releases from Max Essa & Stevie Kotey blew my mind when I first heard them, dubbed out and atmospheric. I didn’t really know what genre they’d sit under, I just really liked them so asked if I could release them. After the first 12” that covered Arthur Russell’s tracks, the artists that featured and myself came up with the idea of producing a full-length album. Looking back it was a very ambitious project to take on and it took a huge amount of work to pull it off. The album definitely delved into the field of disco and I think on the whole it went down well although covering Arthur Russell’s work was always going to draw some criticisms. It was simply done though out of respect as everyone that worked on the album was fascinated by his output. 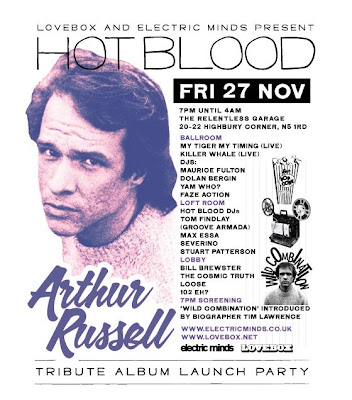 More recently Electric Minds seems to have taken on a very deep house/techno sound. Tell us about this shift and future plans for the label.

I guess it’s a reflection of the parties and the bookings that I make. I like disco and I still collect plenty of records and play them but for me when im at a party if Im going to stay there until the early hours I prefer to hear something a little edgier. I like the subtlety and depth from the house / techno tracks that I buy so I want to learn more about that side of things and if I can, release that type of music on the label.

GHL and Endian are the two latest artists to release on EM. Tell us about those two as they are both new names.

Its actually the same person, its an alias he uses to put out his house based productions as his background sits in another side of electronic music. He’s very talented and I was really into releasing these tracks as myself and a few others had the demos for a while and they always got great reactions when played out.

What’s next for Dolan Bergin?

The last of this years loft parties is coming up with Prosumer, which should be a great way to close the venue for the year. For Halloween, James & Giles from secretsundaze and myself are producing a warehouse party in Shoreditch and from there it will be NYE to see out the year. This year I’ve worked with Warm producing the Ostgut Ton events in London which went really well so we’re starting to put some plans in place for those to continue throughout 2012 as well speaking to some other labels to help them bring their acts to London. I’m also hoping to make it back out to Australia and Japan sometime next year so starting to look into that now.

What is your favourite tea?
The kind that is brought to you in bed.