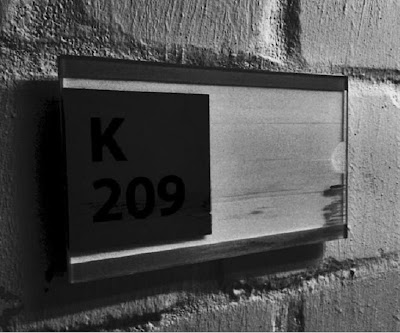 K209 aka Milton Bradley and Henning Baer is a brand new venture to surface from deep within a dank and poorly lit Berlin basement. The label's hugely impressive first release strongly adheres to its sister labels Do Not Resist The Beat and Vault Series sound, or as a Hardwax puts it, harder stomping noisy techno cuts.

Going Forward and its galumphing conveyor belt stomp lumbers in time with haunting glockenspiels and subzero snare hits served directly from Ben Klock’s freezer. Going Forward loutishly barges its way through what seems to be a country club serving afternoon tea in which it politely excuses itself and continues on its merry blitzkrieg way.

K209’s Going Forward EP is a beautiful serving of raw and industrial sized Berlin techno, which will no doubt have DJ's filing anything K209 under ‘buy on sight'.