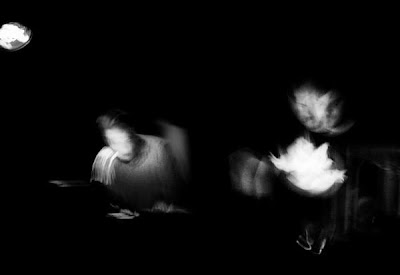 It was their 2009 Applied Generics ep that saw Forward Strategy Group announce their arrival. They did so via four architectonic productions (if you bought the digital version), which could easily be bracketed as “For Outside Play Only” and should be filed under “landscape techno”.

Patrick Walker and Al Matthews (aka Smear) have since released a controlled stream of eps - largely on Perc Trax - which ultimately lead to their debut album Labour Division, unshackled in May of this year.

FSG’s Labour Division comes one year after Perc’s heralded Wicker and Steel lp -  described by The Guardian in the wake of last years London riots as “an angry snapshot of modern Britain”.

If Wicker and Steel was a snapshot of modern Britain, then Labour Division may well be a snapshot of post-riot Britain. Peace has been restored, but troublesome, menacing undertones still linger.

The two have compiled a candid selection of tracks citing “arty cry-wank-shoegaze”, Italian breakcore-electro and Japanese noise-rock as influential soundtracks throughout their lives.


Inadvertently or not, the two offer an insight into the make up of Forward Strategy Group's DNA and lend an understanding to where their dancefloor and non-dancefloor fixes originate.


EDIT: It's been brought to my attention the youtube clips only work using Safari. This will be rendered for future selections.
Ride - Decay [Nowhere] - Patrick

If I had never heard Ride's album Nowhere, I'd have probably never wanted to make music. This album was one of the things that I really connected with as a kid, this track just rips me right open.  The wall of noise, saturated effects and hammering rhythm make this track a bit more than a piece of arty cry-wank-shoegaze for depressed hipsters. This track has something very primal about it, I'd probably want this as a soundtrack to the end of the universe.
Various Artists - Erode [Chain Reaction] - Patrick

Chain Reaction is one of the often overlooked sub-labels of Basic Channel. It served as an outlet for friends of Moritz & co to follow up and expand the dub-techno universe. This whole album, with the works of Porter Ricks, Monolake, Fluxion etc; are a huge influence on everything I do musically. All of these artists produce music which is effortlessly balanced, utterly hypnotic and the perfect DJ tool for an expanded set.
FFWD - Klangtest [Inter-Modo] - Patrick

The album Atmospherics by James Bernard is among one of the finest releases on a label I used to follow religiously: Rising High. The name of the album doesn't entirely serve it justice as it's very engaging, there is a lot of tension. It's fully immersive and incredibly visceral, it’s like a trip to another world - EPIC.
DJ HELL - Hot In The Heels Of Love (Dave Clarke Remix) [Disko B] - Patrick

Lets face it. If this track isn't in your records bag, if you don't own it on some form of vinyl, then in my eyes - you aren't really a techno DJ. This track never fails to drive people nuts and it was the first “proper” techno record I ever bought.
ADC - Steel Files [Index Records] - Al

Listen
ADC are 2 Italian breakcore-electro producers. Where others in this genre produced flailing and seemingly random rhythms, ADC is intricate and fluid, yet simultaneously rigid and mechanical. The meaty parts of their tracks generally stay the same, but their reinforcing sounds are subtle, constantly moving and compliment each other in so many ways. There's a wayward catchiness to their work as well, it's pretty easy to mouth along to. I released this kind of stuff quite a few years ago and I was largely influenced by ADC and other similar artists. It shows you can have a degree of finesse and subtlety behind a juggernaut of squealing sounds.
Cupol - Like This For Ages [4AD] - Al

I'm a huge fan of Wire and anything involving Bruce Gilbert and Graham Lewis. Both sides of this single are eerily close to a lot of techno we're into and it's always been a staple in our DJ sets - there's so much going on. It's so hard to distinguish the live instrumentation from the electronics. Both songs on the single were in part inspired by the Master Musicians of Joujouka, but it's taken to such a surreal and disorientating end. It's less about being an overt homage to African music, that influence is just a vessel for two extremely adventurous artists.
Archae - Resolute [Maracas] - Al

I'd always dabbled with techno when I was younger, but I was never really that passionate about it. Hearing Archae, Grovskopa & Luka Baumann for the first time was the catalyst for me diving headfirst into producing techno completely. I was never keen on any music that relied heavily on 909 hi-hats and chords to drive it, it's so cheap. Finding techno that was really intense, inventive and cliché-free was a revelation. I knew straight away techno had more possibilities than the power-noise and hardcore I was making.
Melt-Banana - Section Eight [A-ZAP Records] - Al

I had an extreme dislike for almost all music growing up. I never really had any access to anything I would have liked. I'd dip into John Peel and hear the odd interesting track, but it was quite late on that I found a band I really loved - I was  maybe 16 or 17. To me Melt-Banana was the best pop music I'd ever heard; no notes, no storytelling, no emotive changes, just all the good stuff.
Death - High Cost Of Living Chapter 1 [Trope Recordings] - Al

When I was 14 I bought a tape called DJ Freak Live In Geneva, it was full of the noisiest and most violent, hardcore techno around at the time. At 45rpm the tempo would start at around 240bpm. After 40 minutes or so everything stops and Freak plays this Heckmann track just before he really lets rip. Set against the racket of the rest of the tape, it's rather nightmarish, but equally stunning.
Posted by TEA at 14:40